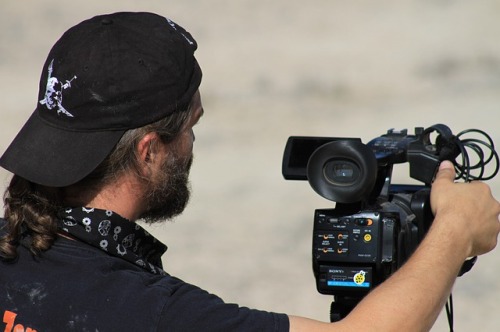 My students don’t remember an entertainment landscape that didn’t include around-the-clock reality shows.  More than 750 reality shows aired on cable television in 2015, 350 of which were brand new. From talent contests to quirky families to dating hopefuls, reality shows appear to be scripted, but in fact, they aren’t written until all the footage has been shot. During the editing process, the director and editors look for patterns, storylines, opportunities for tension and arcs as they create the narrative.  All scenes that don’t support the narrative end up being cut away, which is one way I often explain writing revision to students.

For the purpose of generating writing ideas, last week I asked students to pretend they had a camera crew following them around for 24 hours. Students recorded everything they did for the previous 24 hour days by jotting down a word, a clause or a phrase.  Instead of writing just “work” or “school” or “homework,” I asked that students write a short description of what they were actually doing as if a camera crew was shooting footage.  What was the scene? Who was in the scene? What were they doing?

The key to this activity is to ask students to look at their own life as if it were a reality show, looking for questions, patterns, significant moments, and meaning.   Watching as an audience or an outside observer allowed students to create distance and objectivity. I also asked students to use a third person pronoun to refer to themselves instead of using “I” and always write “the subject, ” as in “the subject made a tuna fish sandwich.”  Once students compiled this list, we pretended to be producers looking at 24-hours of footage for a controlling question or a claim that could be proven or challenged by the reality of this footage.

In the documentary film “Sherman’s March,” filmmaker Ross McElwee’s burning question at the beginning of his quest was:   how did Union General William Tecumseh Sherman’s military approach during the final months of the Civil War effect the South today?  But right before McElwee embarked on a road trip to follow Sherman’s footsteps, his girlfriend dumped him, and the march took on a very different pursuit, namely as Vincent Canby’s 1986 New York Times review states:   “Is romantic love possible in an age of supermarkets, fast food, nuclear arms and the sort of lightweight camera and sound equipment that allows anybody to film his own life?”

In Elizabeth Barrett’s 2000 Appalshop documentary “Stranger with a Camera,” she states her controlling questions in a voice over throughout the story of Kentuckian Hobert Ison and filmmaker Hugh O’Connor: How is a camera like a gun? Can filmmakers show poverty without shaming the people they portray? What are the responsibilities of any of us who take images of other people and put them to our own uses? What is the difference between how people see their own place and how others represent it?

After students recorded their 24-hour camera footage, I asked them to look over their scenes and extract a broad controlling question. This question could render a multitude of great starting points for informational and argumentative texts.  Wording their claim or counter claim in the form of a question helps students see the subject from various angles.  A question requires students to assume a pursuant stance in order to answer it. Documentary film makers often call this a controlling question.  It’s the question that clarifies and focuses the shooting, production, and arrangement of the film. Here are some of the questions my students extracted from their 24-hours of “footage.”

Notice there’s a disproportionate number of questions dealing with fatigue, expectations, procrastination, technology, introversion, and social anxiety, all topics that weigh heavily on teens today.  I did this activity on the first day back from Winter Break, so we were all dying a little inside which explains the dark undertones of these questions. However, these questions make great starting places for both argumentative and informational texts, writing that is pulled directly from their lives.