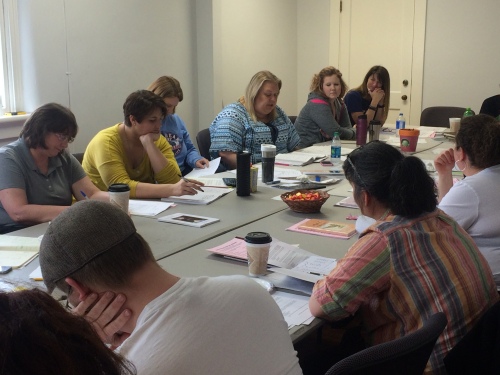 In 1986, I took my first creative writing class with Gurney Norman at the University of Kentucky. At the end of a semester, Gurney wrote us a letter. “Writers work mostly alone, but sometimes they get together for a little while.  It means whatever it means.”   I still have that letter, and I think about his words often. Teachers are equally singular.  We go into our rooms and shut our doors, but sometimes it’s good to get together to connect with one another. 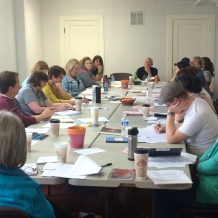 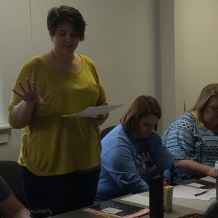 Christopher McCurry leads us in developing our own poetry forms.

I’m grateful to the Morehead Writing Project for hosting two writing retreats each year that brings teachers and writers together for a day of community.  These single days, carved out in October and April, are grounding points in my year.

On Saturday, April 23,, twenty-five writers and teachers of writing met at the Gateway Arts Center, a converted Methodist church that has been painted lemon yellow on the corner of Wilson Alley and Main Street in Mt. Sterling, Kentucky.    We gathered around a long table in a narrow, upper room with hard wood floors and lots of natural light.  Fueled by coffee and donuts, we began.

Abby Thomas, the creative writing teacher at the local high school, started us off with Howard Nemerov’s poem, “Because You Asked about the Line Between Poetry and Prose,” and asked us to respond to the poem by describing the line between prose and poetry or to articulate the line between two other elements/concepts. We wrote for fifteen minutes and shared.

Carole Johnston, author of Manic Dawn and Journeys: Getting Lost, then led us in a 90-minute writing exercise on the tanka, a Japanese short form, traditionally written as thirty-one syllables in a single unbroken line. Similar to the haiku, there can be some syllable counting business, but Johnston discounted that as unnecessary.   Her advice was to pay attention to what is around you and put it down in mindful language.  Keeping the language concrete, writing tankas can be a daily spiritual practice which forces you to be present for the moment of observation.  She asked us to write about a moment from our childhood that was embedded in place.  We wrote for ten minutes or so. Then she asked us to circle the concrete nouns and verbs in the paragraph we had just written and arrange them in lines that followed a short/long/ short/long/long poetry arrangement.  We shared again and repeated the process two more times. Each time we converted experience into tanka, the writing became more concrete, visual, and compact.

Next up, Christopher McCurry, author of Nearly Perfect Photograph: Marriage Sonnets, editor of Accents Publishing, and co-founder of Workhorse, a literary collective in Lexington, also talked to us about forms, indicating that forms were merely starting placew for poetry.  Like taking a cat on a walk with a leash, poetry forms allow us to reign in our creativity, not for the purpose of squelching it but for clarifying the moment and the poet’s intent.

After reading several love poems in varying forms, McCurry invited us to create our own poetry form based on some organizing principle in our lives – draw a grid of your day, look at the pattern of your children, your pets, your collections,  the things you take care of, maybe how your cell phone apps are arranged, and create a poetry form based on this organizing principle in your life.  As the forms took shape, we made decisions about line length, rhythm, rhyme, and stanzas. Finally, we named our forms as well.  Here are a few of them:

Following lunch, we embarked on a writing walkabout, a Morehead Writing Project staple which basically looks like this: writers fall into groups of three or four and walk around a place until they happen upon a spot where they want to write –a park, a coffee shop, a creek bank, an abandoned store front, etc.  They settle into the spot and write for fifteen or twenty minutes. When time is called, they share what they’ve written.  No real criticism or feedback is given.  The space just absorbs the writing, and the group moves on to the next unplanned destination and repeats the process until the walkabout is finished.  In large cities, walkabouts can take an entire day. We had two solid afternoon hours to roam.

My group had three people in it, and we stopped at the old train depot,then we meandered up Bank Street to the unoccupied Traditional Bank drive thru alley, then ended up on the steps of the Montgomery County courthouse on Court Street.

At the end of the day, the large group reconvened on the front patio of the old Mt. Sterling High School which is now a senior residential apartment complex. We had a small reception and shared the fruit of their labors with an informal open mic.

The day was sweet with words and memories. It means whatever it means. Until next time.